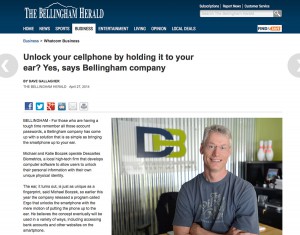 BELLINGHAM – For those who are having a tough time remember all those account passwords, a Bellingham company has come up with a solution that is as simple as bringing the smartphone up to your ear.

Michael and Katie Boczek operate Descartes Biometrics, a local high-tech firm that develops computer software to allow users to unlock their personal information with their own unique physical identity.

The ear, it turns out, is just as unique as a fingerprint, said Michael Boczek, so earlier this year the company released a program called Ergo that unlocks the smartphone with the mere motion of putting the phone up to the ear. He believes the concept eventually will be used in a variety of ways, including accessing bank accounts and other websites on the smartphone.